Invisalign treatment with mandibular advancement is an efficient method for correcting Class II malocclusion in growing teens with patients reporting comfort and satisfaction during the treatment. This approach uses precision wings incorporated into the upper and lower aligners to engage the mandible in an advanced edge-to-edge position while the anterior teeth are being aligned. This reduces the use of interarch elastics, and differentiates the practice by offering another Class II solution besides wires/ brackets and functional appliances like the Herbst appliance. The simultaneous correction of the bite along with dental alignment results in greater efficiency compared to treating the bite relationship and the dental alignment sequentially.

In a systematic review, Janson, et.al. noted that functional appliances were effective in correcting Class II malocclusions in growing teens, with the effects of mandibular advancement-type appliances being similar to the effects of Class II elastics. These effects can be summarized as being primarily dento alveolar, with a smaller component of the change being skeletal.

Both fixed and  removable Class II correctors have their advantages and  disadvantages. Fixed  appliances such as the  Herbst reduce the  need for patient compliance, although patient comfort and  appliance breakage can  be an issue. Furthermore, the appliance carries an additional laboratory cost. Considerable chair  time must be invested for appliance insertion and  removal. On the other hand,  removable appliances such as the  twin block  tend to be bulky and  their effectiveness are limited by frequency of wear by the  patient. Class II elastics present a simple  and  effective means of correcting Class II malocclusions, especially when paired with Invisalign clear aligners. However, patient compliance with elastics wear throughout the entire treatment is a critical  factor for achieving successful outcomes. The incorporation of mandibular advancement features directly into the  aligners reduces the  dependency on intraoral elastics and  additional appliances for successful bite correction. When elastics are needed, they  are typically used at the  end  during  additional aligners, to stabilize and  fine tune the bite correction, after the majority  of the bite correction has already been achieved with the precision wings  feature. 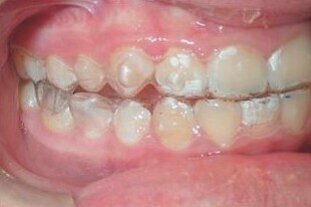 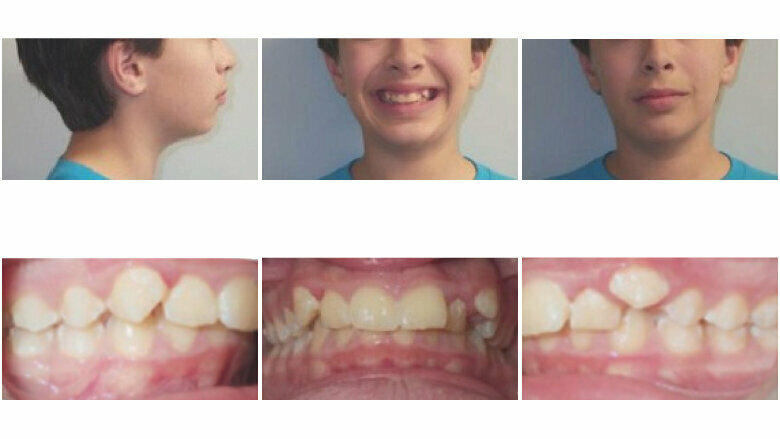 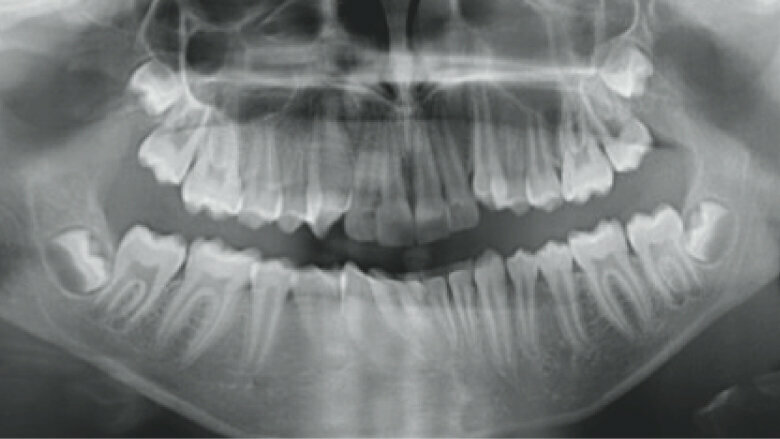 The patient is an 11 year  6 month old male  with a chief  concern of “overbite.” Diagnostic summary:

The  slightly retroclined upper incisors and  flared lower  incisors are consistent with dental compensations for a sagittal jaw discrepancy. The skeletal vertical dimension being within normal limits suggests that the deep bite is predominantly dental in nature.

The  goal was to treat the  canines and  molars to Class I. For efficiency, the Class II correction would  be accomplished during the  initial phase, using aligners with precision wings  instead of Class II elastics. Class II elastics, if needed, would  only be used during additional aligners. The  crowding would be corrected through dental expansion and  arch development (i.e., non-extraction and  without any interproximal enamel contouring). Retention would  be accomplished using Vivera® retainers worn  only at night. 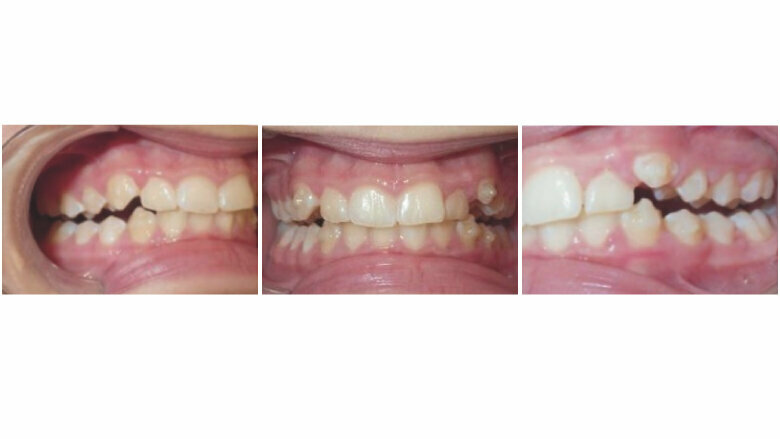 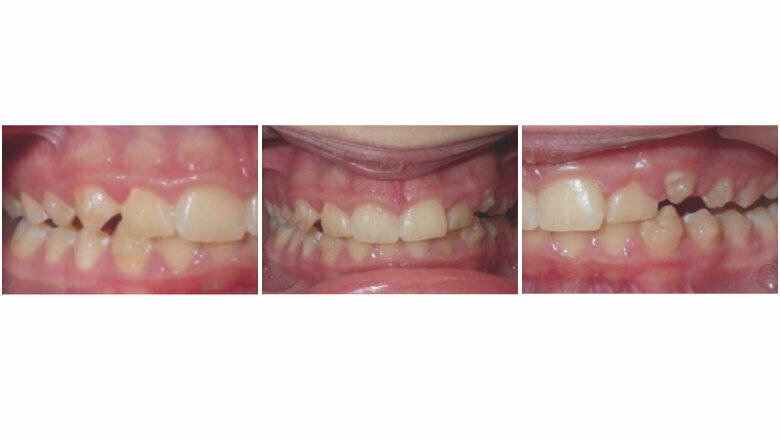 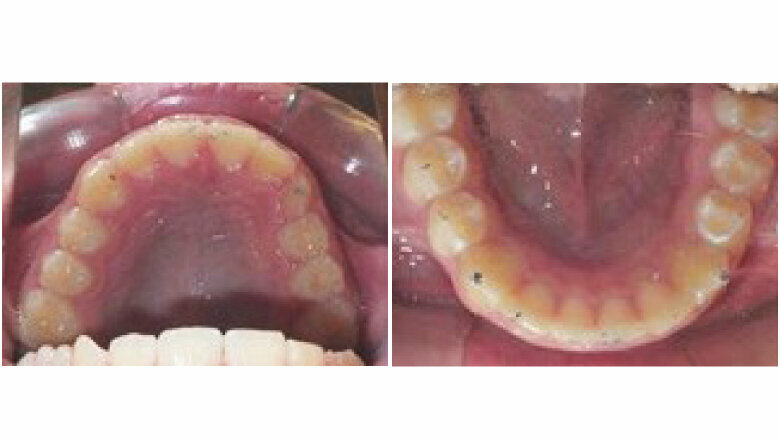 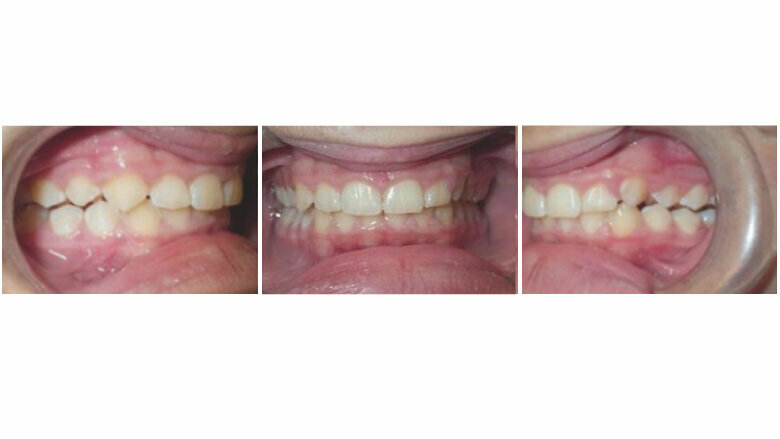 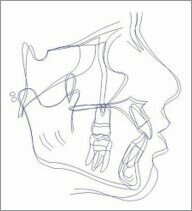 Cephalometric analysis summary (initial to end-of- mandibular advancement): The cephalometric superimposition showed that a counterclockwise rotation of the  mandibular position occurred after the  bite correction phase, with the  ANB angle improving by 2.2˚ (from 6.9˚ to 4.7˚).  The  interincisal angle decreased from 127.2˚  to 120.1˚, primarily as a result of a +6˚ change in upper incisor inclination (U1-NA increased from 17.4˚ to 23.4˚). The  lower incisor inclination increased slightly (L1-GoGn = +2˚).

After 27 aligners in both arches (11 months of treatment, 2 weeks each aligner2), the  patient was Class I canine on the  right side and  3 mm Class II canine on the  left. Aligner wear compliance was good and  oral hygiene was excellent. The  majority of the  crowding in both arches was resolved during the  mandibular advancement phase. The  bilateral posterior open bite present would  be closed by additional leveling  of the  curve of Spee, along with lingual root torque of the  upper anterior teeth. By reducing the anterior interferences, the  mandible would  be able  to autorotate into a better Class I relationship.

The current Invisalign product is now configured for 1-week aligner changes. At the time of treatment, the aligners were changed every two weeks.
After the mandibular advancement phase, the patient switched from 2-week aligner changes to the current 1-week aligner change interval.
Bilateral Class I occlusion was achieved, along with coincident midlines and normal overbite and overjet. A reduction in facial convexity resulted in a pleasing soft-tissue profile. The patient’s dental alignment, smile arc, and final occlusion were all excellent.
Cephalometric analysis summary (initial to final): The ANB angle improved by 2.4˚. The interincisal angle decreased from 127.2˚ to 116.8˚, as a result of a +8˚ change in upper incisor inclination and +4˚ increase in lower incisor inclination. Mandibular autorotation led to a -4.4˚ reduction in SN-GoGn. 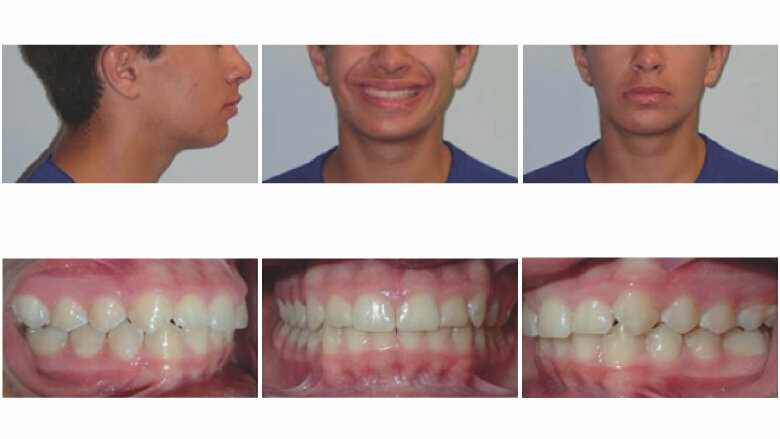 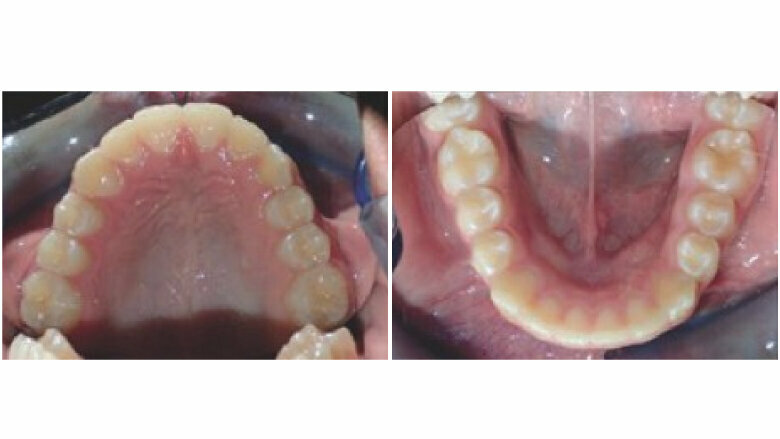 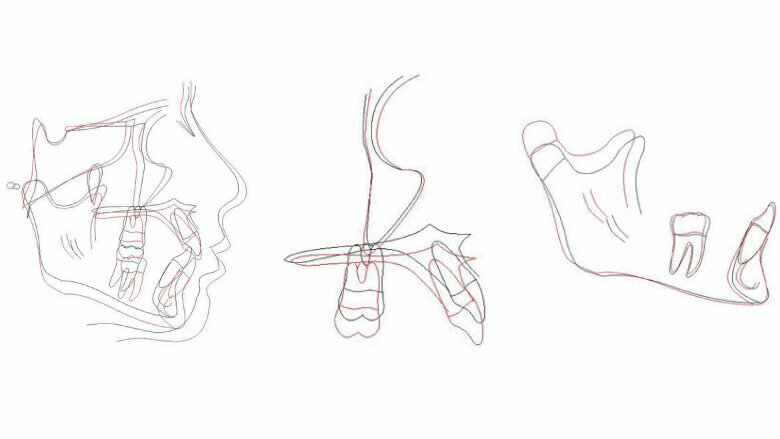 The  Invisalign treatment with mandibular advancement can be  a routine treatment modality for any growing Class II teen. This treatment approach enables the  incisors to be  aligned at the  same time that the  bite is being advanced. Proper incisor alignment was the  key to success in this case, since removing any anterior interferences allowed the  mandible to come forward into an ideal  overbite and  overjet relationship. Setting up the mandibular advancement in the  ClinCheck treatment plan to a “super” Class I or mild Class III cuspid relationship would  be  recommended for treating any similar cases in the  future, in order to further reduce the use of Class II elastics during additional aligners. Adding  sufficient lingual root torque to the  upper incisors is also  recommended, so that enough clearance in the  overjet is present for a stable Class I position to be  established. Having  a posterior open bite during the  mandibular advancement phase is common, and  can be  corrected through arch leveling  with additional aligners, or by initially leveling  the  arches with aligners through a pre-mandibular advancement phase.

Remove anterior interferences through dental alignment, leveling  of the curve of Spee, and  lingual root torque of the  upper incisors.

Case selection recommendations when starting to use this feature:

A good malocclusion to initially target is a dental Class II with a skeletal Class I normo-divergent or mildly hyperdivergent growth pattern. An ANB < 5 degrees and  mild-to-moderate mandibular retrognathism are also helpful.

What kind of cases to try after that:

As your  familiarity  with the  mandibular advancement feature increases, try treating growing teens with more severe Class II malocclusions, and with more severe hyperdivergent growth patterns. Patients with severe skeletal Class II or severe vertical growth patterns can be  treated, but results so far have been progressively less predictable with worsening skeletal patterns.

What kind of conditions are favorable and unfavorable for treatment using this aligner feature?

The  more easily  the  lower  jaw can move straight forward without interfering with the  upper jaw, the  better. Identify  any interferences (anterior and  transverse usually)  and  eliminate them as early  as possible during the  alignment phases of treatment.

For patients with deeper overbites and/or retroclined upper incisors, using a series of pre-mandibular advancement aligners to reduce anterior interferences is key to correcting the  sagittal relationship.

What was learned from  treating this particular case?

Common challenges/problems experienced during teen treatment with this aligner feature:

Leveling the  curve of Spee and  mandibular advancement cannot be accomplished simultaneously during the  bite correction phase, so these corrections need to be  done sequentially instead.

How to avoid or correct these issues?

Spend the  first 3 to 5 months leveling  and  aligning  the  arches with aligners in a pre-mandibular advancement phase.

Barry  J. Glaser, DMD received his doctorate in dental medicine from The  University of Pennsylvania School of Dental Medicine and  earned a certificate of Advanced Graduate Studies in Orthodontics from Boston University.  He served as associate director of orthodontics at Montefiore Medical Center in New York City from 1992 to 1995. He has been in private practice in Cortlandt Manor,  NY, since 1994. Dr. Glaser was an early adopter of Invisalign Teen®  and  has extensive experience with treating teens and  adults of all malocclusions using Invisalign aligners.

Minimizing the use of elastics in Class II treatments not only addresses a patient compliance concern, it also addresses a treatment efficiency concern. The...

Align Technology, Inc. (NASDAQ: ALGN) today announced that its annual Invisalign Scientific Symposium will be an online digital experience, held on May ...

Align Technology, Inc. (NASDAQ: ALGN), a global medical device company engaged in the design, manufacture and marketing of the Invisalign system, the most ...

News Thu. 18 November 2021
Align Technology ‘pays it forward’ Through ‘Act of Random Kindness’ Programme in ME

News Mon. 9 November 2020
Celebrating Healthy Smiles. With some of the best dental advice you can get!

Even amid a pandemic that has halted many from visiting their dentist regularly, there’s still many things one can do to keep their smile healthy.

Align Technology announced the appointment of Angelo Maura as general manager for the MEA (Middle East and Africa) region. Bringing with him a wealth of ...

DUBAI, UAE: Align Technology has announced plans to open a new manufacturing facility in Poland to address the large and underpenetrated market opportunity ...

Interview: “A hybrid model of the latest digital tools and face-to-face interaction represent the future of dentistry”

Dental Tribune MEA had the pleasure to interview Markus Sebastian, SVP and MD of Align Technology EMEA, during his recent ...

News Tue. 28 September 2021
88% of dental patients in UAE & KSA are ready to embrace tele-dentistry since the Covid-19 pandemic

Dubai, UAE: According to a new survey commissioned by Align Technology, a global medical device company and pioneers of the Invisalign system, nearly 88% of...

GBT and new concepts in cariology

An update on irrigation in Endodontics

Management of the Odontogenic Infection for the General Dentist

Expanding potential: The iTero Element 5D Plus lands in the Middle East

Expanding potential: The iTero Element 5D Plus lands in the Middle East / Part 2: Sustainable dentistry in 500 words or more / Interview: “Colleagues challenged me to predict where caries might occur in the mouth” / Industry / News / Industry / Immediate restoration of an edentulous maxilla / New cartridge and mixing tip system: applying impression material effi ciently and easily / Study analyses tooth survival after root canal therapy in US population / Restorative simplicity for a challenging case with limited space / Ethical guidelines missing in field of dentistry and AI, researchers say / Align Technology drives innovation in digital dentistry with launch of iTero Element Plus Series in the Middle East / Bestseller for daily use in practices: Dentsply Sirona delivers the 75,000th X-ray system Heliodent Plus / Interview: “Our plan is to make this congress a memorable event, both scientifically and socially” / Interview: “To me, dentistry is a consolidation of science, art and medicine all in one field” / Innovation meets fascination: New Axano treatment center sets the standard for smart, digital dentistry /