Occasionally during nonsurgical root canal therapy, an instrument will separate in a canal system, hindering cleaning and shaping procedures and blocking access to the canal terminus.

There are many factors that contribute to instrument separation. The most common causes are improper use, limitations in physical properties, inadequate access, root canal anatomy and possibly manufacturing defects3. The purpose of this article is to summarize current understanding of the impact of separated instruments on prognosis, treatment options, and to make recommendations for their management.

Prognosis
The prognostic impact of a retained separated instrument on endodontic treatment and retreatment has been investigated in only a few studies, most of which are based on small numbers of cases. Recent clinical studies document that prognosis is not significantly affected by the separated instrument itself. Prognosis depends on how much undebrided and unobturated canal apical to and including the instrument remains. The outcome is better if the canal was instrumented to the later stages of preparation when the separation occurs4. If vital and uninfected pulp tissue was present, and there was no apical periodontitis, the presence of the separated instrument should not affect the prognosis5. If the instrument can be removed without causing iatrogenic complications such as perforations, ledging, extrusion of the fragment through the apex, or excessive weakening of tooth structure (Figure 1), the prognosis will not be affected. However, if the instrument cannot be removed or bypassed in a tooth with a necrotic infected pulp and apical periodontitis, the prognosis will be uncertain. These cases should be followed closely and if symptoms persist, apical surgery or extraction should be considered4.

Treatment Options
A clinician could either (1) attempt to remove the separated instrument, (2) bypass it, (3) prepare and obturate to the segment. Before a clinician makes the decision to remove a separated instrument, he/she should ensure the availability of and successful handling of the required armamentarium. The surgical operating microscope is an invaluable tool in helping to remove separated instruments. It increases visibility by the use of magnification and light and increases the efficiency and safety of almost all techniques used.
Various methods have been proposed for removing separated instruments. Chemical solvents have historically been used to achieve intentional corrosion of metal objects6. If the separated instrument is clinically visible in the coronal access and there is sufficient space for a hemostat or Stieglitz Pliers (Henry Schein, Melville, NY) (Figure 2), these should be used to remove the fragment through the access cavity preparation. In more recent times, specialized devices and techniques have been introduced. Masserann instruments, wire loop techniques, hypodermic surgical needles, extractors, the Post Removal System (SybronEndo), the EndoPlus System (EndoTechnic, San Diego, CA) and the Instrument Removal System (DENTSPLY Tulsa Dental, Tulsa, OK) have all shown limitations7.

Figure 1. Separation of a second instrument while attempting to remove the first separated instrument is not uncommon.
Figure 2. Steiglitz forceps for removal of accessible fragments.
Figure 3. A selection of ultrasonic tips with contra-angled designs & different lengths to enable removal of dentine from the root canal system and facilitate instrument removal. 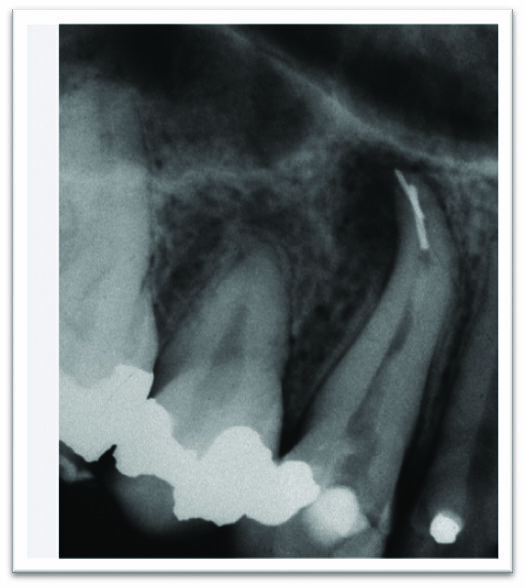 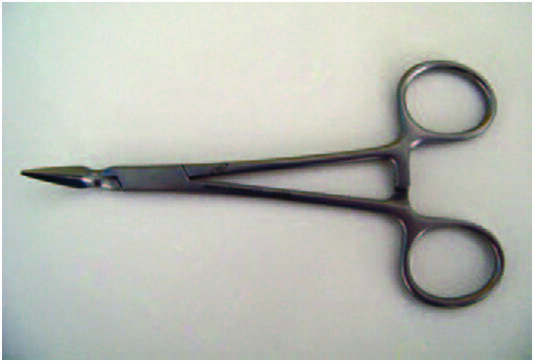 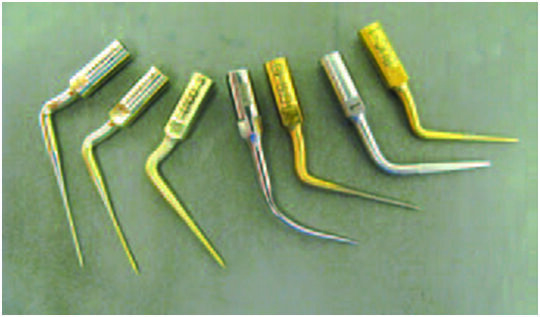 Ultrasonic instruments have been shown to be very effective for the removal of separated instruments8. Nevertheless, successful removal relies on factors such as the position of the instrument in relation to the canal curvature, depth within the canal, and the type of the separated instrument7. To remove the instrument predictably, the clinician must create straight-line coronal radicular access. Ultrasonics tips can then be used to create a staging platform to trephine dentine around the fragment (Figure 3). With this trephining action and the vibration being transmitted to the fragment, the latter often begins to loosen and occasionally it will appear to jump out of the canal3. Care must be taken, however, to avoid complications such as ultrasonic separation or root perforation.

Clinical Recommendations and Conclusions
Removing a separated instrument requires skilled use of the operating microscope and is generally considered within the remit of the endodontic specialist.
Attempts at removing a separated instrument can be established as a first management option if the instrumented separated at an early stage of root canal cleaning and shaping, and the fragment is accessible. If the fragment is at or beyond the canal curve, retrieval is much less predictable. As removal is associated with considerable risk, by passing the instrument should be considered. If retrieval attempts prove unsuccessful without further compromising the tooth, and the tooth continues to be symptomatic or fails to show any signs of healing at recall reviews, alternative treatment options such as apical surgery, intentional replantation or extraction can always be considered. In all situations, management options should always be thoroughly discussed with the patient and the definite treatment plan should take into consideration factors that will affect prognosis (especially the presence of periapical pathology) and should be towards the patient’s best interest.

The use of lasers to treat periodontal and peri-implant diseases: an overview of the mechanism, efficacy, and advantages of YSGG laser

The Gut Stops Here: Caring for Patients with Gastroparesis

Interview / Industry / Interview: "We want to bring the rest of the dental industry with us on this journey to a more sustainable future" / Support for patients with disability in dental clinics / News / NIWOP – Part 1: The pre-treatment / Tenet: Time inversion applied to dentistry / News /