Presented here is a guided biofilm therapy case with the aim of achieving improved periodontal health in a nervous patient. Treatment was carried out over a period of several months between April and November 2018.

Background
This 45-year-old female patient had never smoked, was a healthy weight and presented with no relevant medical history. However, she was diagnosed with generalised chronic periodontal disease, which needed to be addressed.

The patient joined the practice after moving to the area and was referred to the dental hygienist following a routine examination with the dentist which revealed BPE codes 3 and 4 and radiographic examination confirmed moderate to advanced periodontal disease.

Clinically, the patient presented with plaque accumulation on all surfaces, heavy supraand sub-gingival calculus deposits, florid gingivitis, moderate to severe pocketing and bleeding on probing in all sextants, with spontaneous bleeding in the lower anterior sextant. Significant fetor oris was also noted at the initial consultation.

The patient had avoided the dentist for many years after a bad experience had left her fearful and anxious but had decided it was time to face her fears after becoming conscious of how “ugly” her gums had started to look.

The patient was very anxious but equally keen to improve her situation. The aetiology of her periodontal disease was explained carefully to her and her role in eliminating activity and improving prognosis was stressed.

1. Do nothing. The condition was unlikely to improve without professional intervention and it was more than likely that symptoms would gradually worsen, and the condition would deteriorate to a point where teeth were lost prematurely;

2. A course of non-surgical therapy (NST) with the dental hygienist using the guided biofilm therapy (GBT) protocol. If successful and the patient co-operated with home care, it was expected that a good resolution could be achieved;

3. Referral to a specialist. This would not be possible via the NHS pathway until a course of NST had been completed, so private referral was her only option. The patient was advised that at this stage there appeared to be no reason why she could not be managed in general practice with NST. However, she was advised that a referral might be necessary at a later date, if she proved to be a non-responder.

– Hands-on treatment inside the mouth is quick, freeing up time for crucial oral hygiene instruction

– It is gentle – anaesthetic is rarely required, there is no tissue trauma from invasive hand instruments and the warm water and PIEZON NO PAIN is a relationship builder

– It is minimally invasive, so tissues are preserved, and post-operative sensitivity and recession are kept to a minimum. 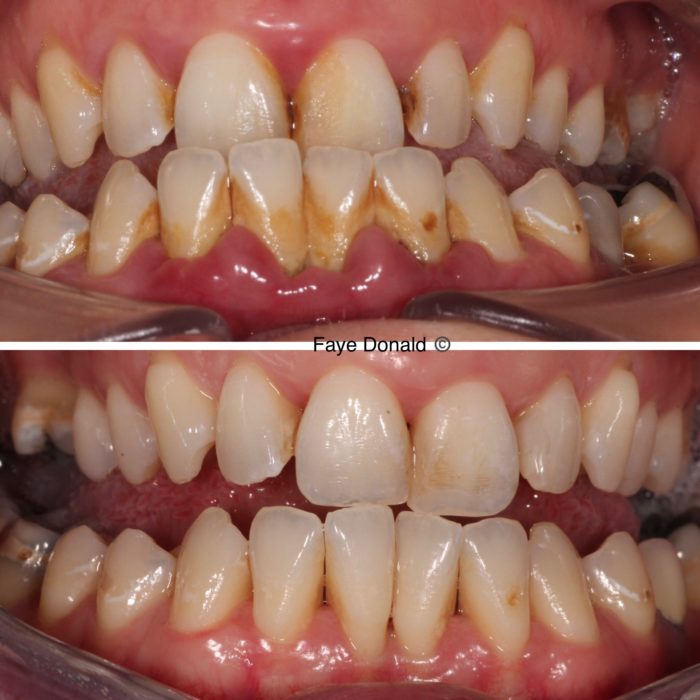 Treatment
Appointment 1
In line with the GBT protocol, disclosing solution was applied and initial assessments, which included plaque and bleeding indices, were carried out; both were recorded at 100%.

Intensive oral hygiene instruction followed, which included an explanation of the nature of disease and its progression. Oral hygiene aids were demonstrated, including an electric toothbrush with an oscillating/rotating head, interdental brushes and a slimline interspace brush for sub-gingival cleaning.

Biofilm was then disrupted using AIRFLOW and PLUS powder containing erythritol, which has been shown to be not only effective in disrupting biofilms but also in the suppression of periodontal pathogens. A gross scale using the PIEZON NO PAIN module was used to remove large calculus deposits that, if left, would have prevented adequate access for interdental cleaning aids. A review appointment was arranged for three weeks later.

Appointment 2 (3 weeks later)
Once again, the patient was disclosed, and plaque and bleeding scores were taken. Plaque was recorded at <10% and bleeding had dropped to 40%. A review of the patient’s oral hygiene regimen took place and adjustments to techniques and interdental aid sizing were made as required. Again, biofilm was disrupted both supra- and sub-gingivally first, followed this time with a thorough ultrasonic debridement to remove remaining calculus.

No hand instrumentation was used.

Appointment 3 (8 weeks later)
The patient was again disclosed, and plaque and bleeding scores were taken. Both scores were recorded as <10% and a dramatic difference in appearance was noted. At this stage, a full-mouth periodontal chart was recorded. Anterior sextants showed no pockets >4mm and posterior sextants showed some shallow residual pocketing interdentally of between 4mm and 5mm with 3 sites measuring 6mm, one of which had bleeding on probing.

Oral hygiene was again reviewed andadjusted as necessary. Full-mouth biofilm disruption took place supra- and subgingivally up to 4mm. Sites measuring >4mm were treated with PERIOFLOW and erythritol powder. PIEZON NO PAIN was used only at sites with obvious remaining calculus and in the 6mm site, which had bleeding on probing.

Post-appointment monitoring
As the patient had displayed a good grasp of home care, motivation was excellent and early tissue resolution was extremely promising, a hands-off approach was applied to allow natural healing to continue. The patient was monitored closely at 12-week intervals for 1 year, during which her pocket chart revealed further resolution, with no site measuring >4mm and bleeding on probing remaining at <10%.