LONDON, UK: Align Technology recently reported on the highlights of its first digital Invisalign Scientific Symposium, held on 15 and 16 May. The 2020 symposium was conducted from a television studio and featured a roster of global clinical and orthodontic speakers, who shared scientific data and their best practices for treating Class II, deep bite and pre-surgical cases, in both adult and growing patient groups, including Phase 1 treatments for younger patients and the Invisalign system with mandibular advancement for teenagers. The virtual format reflected Align Technology’s ongoing commitment to sharing forward-thinking knowledge and providing orthodontists and general dental practitioners with clinical sessions to help them learn from their peers, exchange best practices and advance their own clinics. Ahead of the event, Align Technology pledged to donate €50 for each registered participant to the World Health Organization in the fight against COVID-19, and the company made a total donation of €75,000.

The Symposium attracted more than 1,400 attendees, including over 1,000 orthodontists and 400post-graduate students from 75 countries worldwide. The event was moderated by Dr Beena Harkison (until recently, Align’s director of clinical and professional education in Europe, the Middle East and Africa), who highlighted clinical data on the use of the Invisalign system compared with traditional treatments, as well as the capabilities of the system, as compared with those of fixed appliances.

In his lecture, “Changing the paradigm of deep bite treatment with Invisalign aligners”, Dr Alessandro Greco addressed the perception of aligners and their capacity to help patients with deep bite. He demonstrated the use of Invisalign system protocols in the case of a 14-year-old whom he treated. He found that it was an effective approach for the correction of severe deep bite and efficiently reduced the overall treatment time, requiring fewer additional aligners.

In “Skeletal and dentoalveolar effects produced by aligners and elastics in Class II growing patients”, Dr Federico Migliori from Italy, spoke about the predictability of distalisation with aligners, citing the systematic review by Rossini in 2017 which found that 2.5 mm of distalisation is predictable. The conclusion of the study showed that using the Invisalign system with Class II elastics and distalisation was predictable and that Invisalign aligners were more effective at controlling the vertical dimension and mandibular incisor proclination and had a shorter treatment time than treatments with fixed appliances. 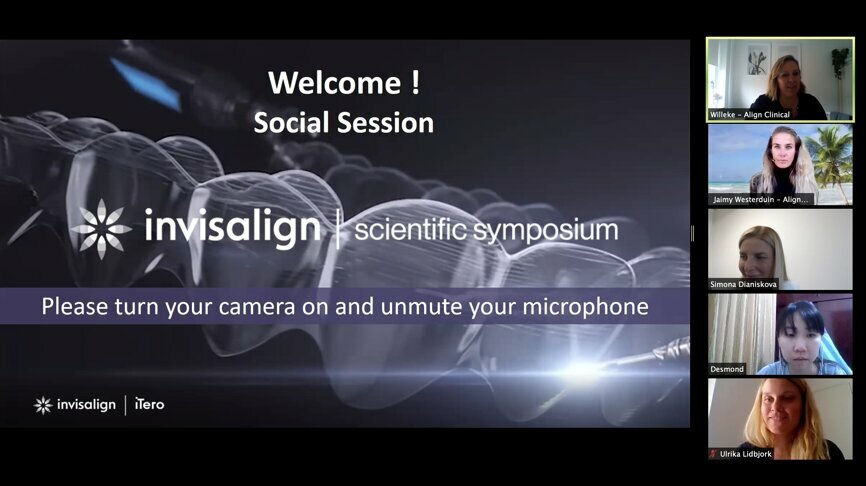 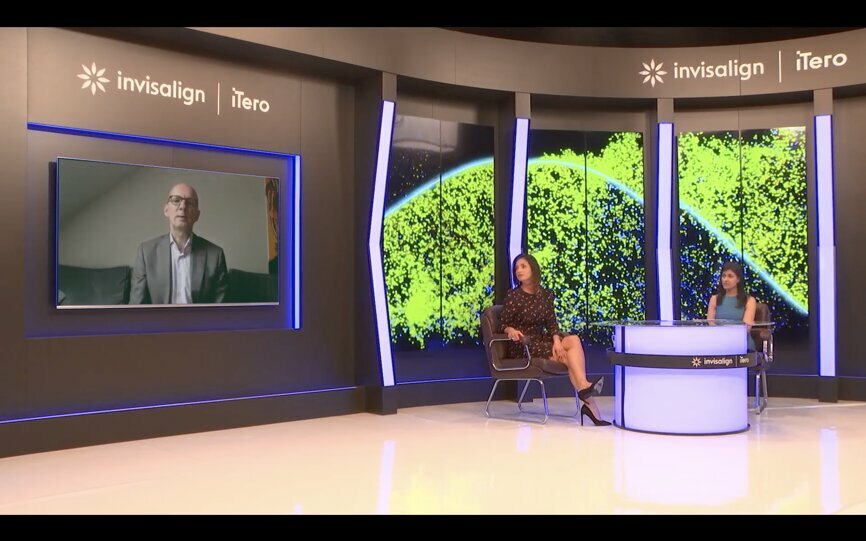 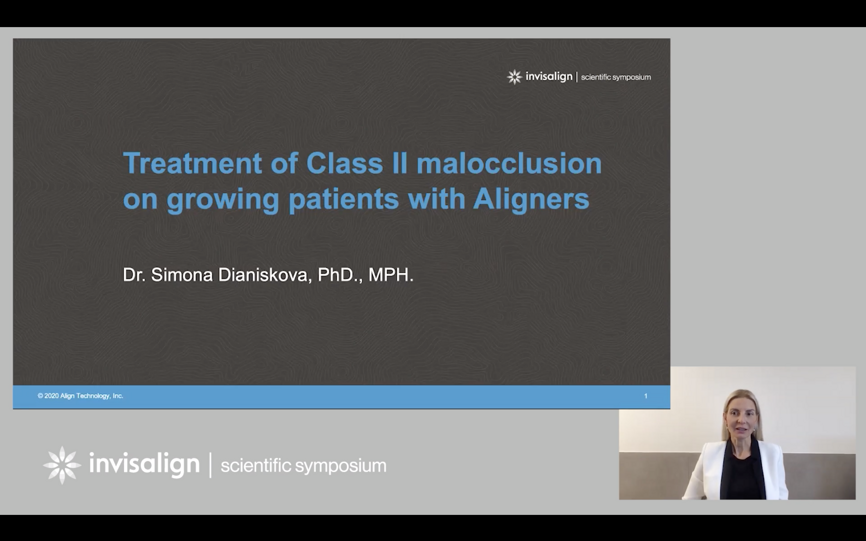 Dr Simona Dianiskova from Slovakia, in her presentation, “Correction of Class II malocclusion in growing patients with aligners”, discussed how she employed aligner treatment to de-rotate maxillary first molars by up to 2 mm (as 85% of Class II cases have rotated maxillary first molars) and expansion to correct a Class II malocclusion. She showed that there was a significant statistical increase in condylar distance and concluded that there was a greater response of the mandible and expected growth using Class II elastics and the Invisalign system, as well as good vertical control. The duration of treatment was between 16 and 21 months.

Both this study and Dianiskova’s and Migliori’s using Class II elastics and the Invisalign system for distalisation, mandibular advancement or elastic simulation, showed that there were no or minimal changes to incisor inclination.

There were two studies on the topic of expansion presented at the Symposium. The first was by Dr Silvia Caruso from Italy, who presented “Arch expansion pattern using clear aligners: A three-dimensional retrospective study in paediatric subjects with posterior crossbite”. The orthodontists who conducted this study aimed to assess the amount of expansion which can be achieved using the Invisalign First system. They found that the most predictable expansion was between the primary canines and that the least predictable was between the first permanent molars.

Together, Drs Tommaso Castroflorioand Francesco Garino from Italy, also presented a study relating to expansion: “Invisalign First: Maxillary expansion with aligners in growing patients”. Like Dr Caruso, they found that expansion was the greatest between the primary canines.

These two studies showed that expansion can be achieved using aligners. They also demonstrated that this is greater in the anterior region than in the posterior and that it is more predictable on the buccal cusps than it is on the palatal cusps. Both studies showed that using the Invisalign First system resulted in an increase in the volume of the palate.

During his lecture, titled “Impacted teeth in growing patients”, Dr David Couchat from France, commented: “The tracking of an impacted tooth is always a challenge, but since I began using the Invisalign system, it has become easier and better. The situation is completely different if you consider tracking a tooth for an adult or a teen.” He also presented his tips and techniques for success in treating impacted teeth.

Align gave attendees the opportunity to achieve peer recognition for their own successful Invisalign treatment cases, and attendees voted for the winner of the Invisalign Peer Review Award. This year, Dr Mercedes Revenaz, an orthodontist from Italy, won first place, and Dr Martín Pedernera from Spain, who received the 2018 award, took second place. Third place went to Turkish orthodontist Dr Cihan Çapan, co-founder and board member of DentGroup Clinics and president of the Turkish Aligner Society.

In commenting on her win, Revenaz said, “The digital edition of the Invisalign Scientific Symposium, in my opinion, was a revelation in terms of the impact. The event was informative and was likely watched more carefully than any other live event. This is easy to explain, as it was followed by doctors who use the Invisalign system, are digital natives, and believe in the power of digital technology. It could only be a success! We all hope that, in the near future, if the conditions are right, international events can be at least a hybrid, with the possibility of being followed live but also via the Web.”

Align Technology also used the symposium as a platform to preview other campaigns that it plans to launch this year to further support digital orthodontics, starting with “invis is your brilliance, enhanced” – a new campaign that celebrates the partnership between the specialist orthodontists and their skills and the technology that Align brings to market to enhance this expertise.

Related Articles
News Wed. 31 July 2019
Align Technology has been a place where one can constantly contribute, innovate and learn

Dr Mitra Derakhshan has worked with Align Technology since 2000 and is Vice President of Global Clinical. She is a clinical expert in the application of the...

A full-day programme in the beautiful setting of Valencia’s City of Art and Sciences complex awaited the 190 orthodontists who registered to attend Align ...

Dr Julia Haubrich is a member of the board of the German Association for Aligner Orthodontics and chair of its sixth scientific congress, which will take ...