Dentist who will make you laugh: Dr Abdulla Ali, a dentist and a comedian

Although he is enjoying very much performing and is busy with many activities, general dentist Dr Abdulla says that his patients still come first. Since he was 13, he wanted to do stand-up comedy, but there was no opportunity for that in the UAE. Dr Abdulla also knew he wanted to do dentistry because he wanted to help people and be in the medical field. Dental Tribune MEA spoke with Dr Abdulla about the role of comedy and dentistry in his life.

Dr Abdulla, thank you very much for speaking with us. Could you tell us a bit about your background?
I’m an Emirati born and bred in Dubai. I went to New Zealand to study dentistry on a scholarship. Since I was 13, I had wanted to do stand-up comedy, but there was no opportunity for that in the UAE, it being a mainly American format. I also knew I wanted to do dentistry because I wanted to help people and be in the medical field. I was going to be a doctor, but my dentist uncle pointed out how depressed his brothers, all doctors, looked compared with how happy he was. I wanted to make people laugh and smile, so dentistry and comedy were the perfect combination.

When I went to New Zealand, I had the opportunity to do some stand-up comedy there. At one stage, I believed I would quit dentistry and do comedy full-time, but I love them both so much that I couldn’t stop doing either. I was in New Zealand for seven years studying, including a foundation year, and I worked there for two years after graduating. 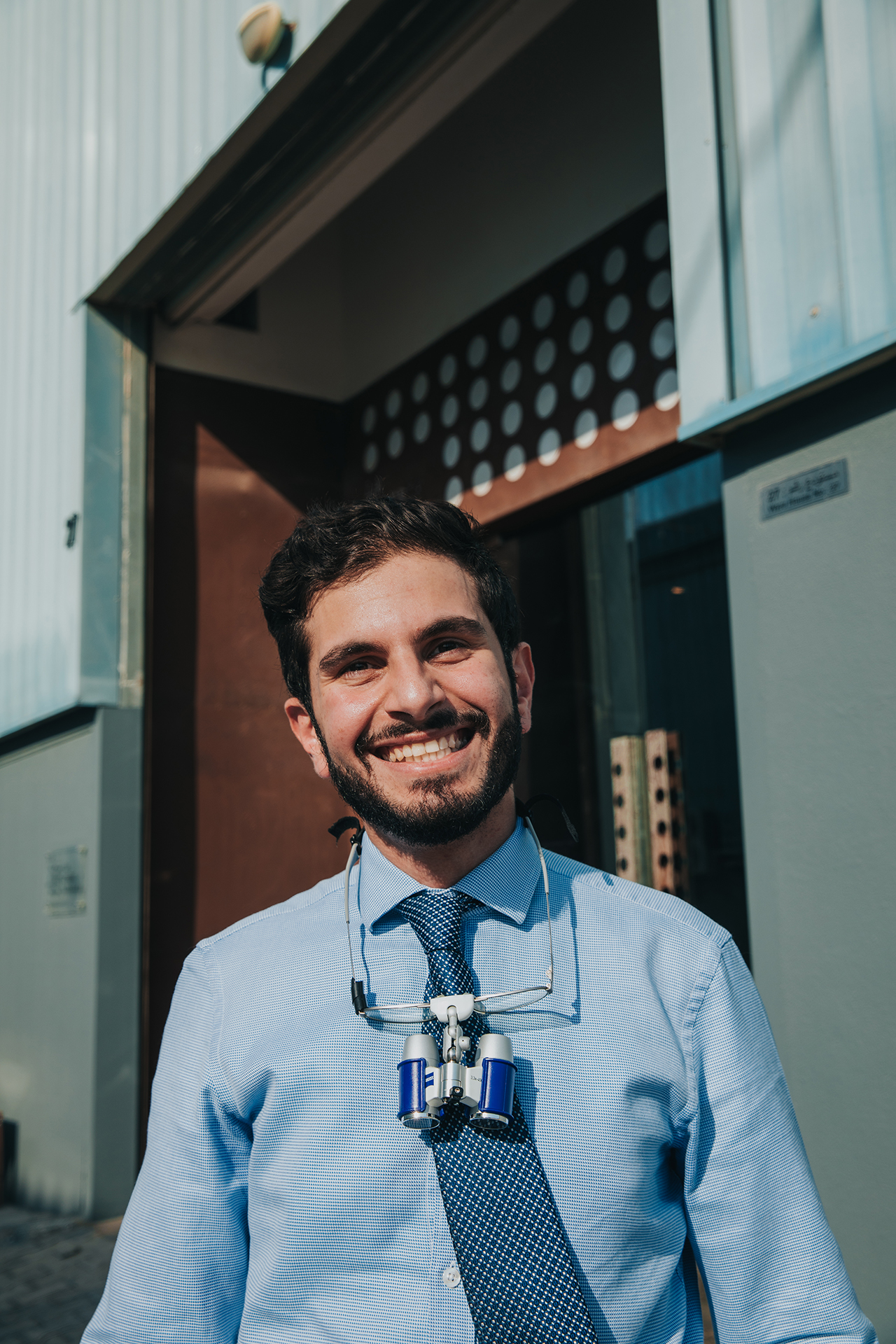 How did you discover your talent?
I was quite lucky, not just with comedy but also with dentistry. I knew I wanted to be a dentist from when I was 15, thanks to my uncle. In Dubai in the early 2000s, we’d go to network cafes, them being great places to hang out and cheap, and I saw stand-up comedy there for the first time when I was 13. It was amazing. I had had no idea that this was a profession. I knew I wanted to take it up, regardless of whether it was well-paid or not.

Could you tell us how and when you started performing stand-up comedy?
I started when I was about 18. I had already been in New Zealand for a year and came back to the UAE for the summer holiday. A comedy festival was on in the UAE, and there were American comedians I went to listen to, and one of them suggested a short workshop. They set up a night on which 12 comedians of different nationalities living in Dubai could perform a show. I was the only Emirati and I was lucky to have been able to participate. Once we had finished the show, Aron Kader asked me to open for him the next day. I got to do these two shows back to back and literally on the third night had to go back to New Zealand. Since it had worked out well in Dubai, I just carried on in New Zealand while studying.

Do you have your own stage name that you are using?
Yes, my stage name is Abz Ali. That's how you can also find me on Instagram @iamabzali.

How do you manage being a comedian while practising dentistry?
I used to think that you had to do one or the other and then I realised that I didn’t want to limit myself to one thing. It’s not always easy. There are times when there’s a comedy opportunity and I can’t do it because I have work commitments. I try to keep the two separate. Dentistry is a passion, but it’s also my main source of income. During the day, I focus on dentistry and at night on comedy. Luckily, most of the time, they don’t clash.

Have you ever considered committing yourself solely to comedy or dentistry?
I’m planning to specialise in dentistry and I’m also planning to pursue comedy further. For most big-time comedians, their main profession is showbiz. I’m not interested in acting or showbiz in general, but I like dentistry.

Do you use humour with your patients?
Yes, I do. Patients are not always comfortable at the dentist. A lot of patients will say that they hate the dentist or that the dental clinic isn’t their favourite place, so I try to use humour to diffuse the situation and make them feel comfortable. It’s a good icebreaker. I don’t tell patients that I’m a comedian, because I think that they might then wonder what kind of dentist is a comedian too.

I wanted to make people laugh and smile, so dentistry and comedy were the perfect combination. 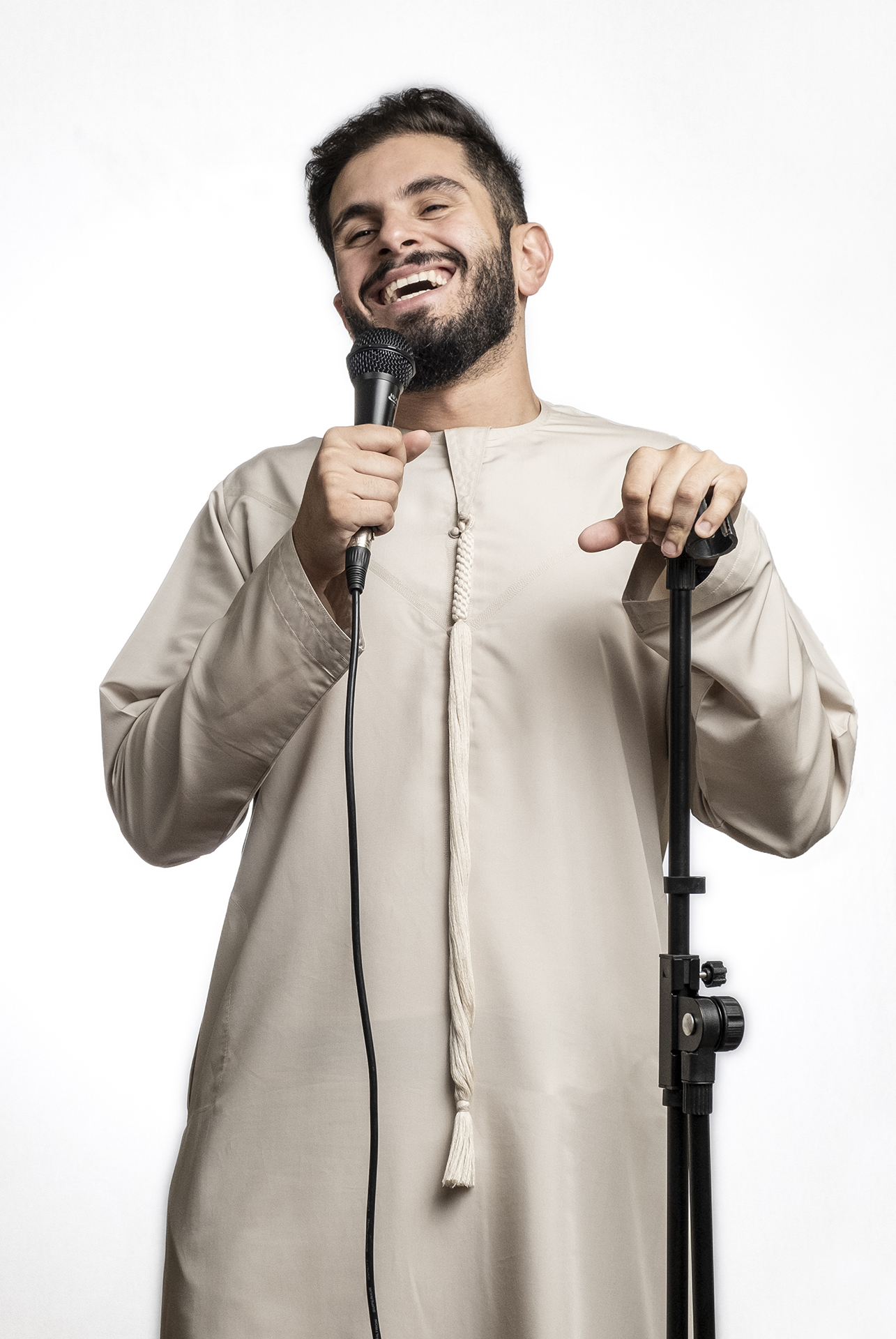 Do you perform only in the UAE or also internationally? Who is your audience?
I used to travel a lot and did a comedy show wherever I travelled, so it would be almost like a working holiday. With COVID, it’s become difficult to travel and the UAE needs all its medical staff in the country at this time. These days, I’m performing only in the UAE, but hopefully it’ll be the rest of the world soon.

Do you belong to a comedic association and where do you perform in the UAE?
Comedians all know each other; we’re a small community—dentistry is almost like that as well. We all perform in the same places. There’re not a lot of Arab comedians. We don’t have any formal association. Most comedy shows take place in Dubai, almost nightly. I prefer performing in Abu Dhabi, since I live there, but shows aren’t as frequent, taking place about three times a month. On my Instagram page, I usually post when my shows are happening and other updates about my comedy career. Follow me @iamabzali.

What topics do you talk about during your performances?
I don’t talk about politics or religion. I talk about everything else, like relationships, mainly real-life situations, my life abroad in New Zealand and my life in the UAE and how they’re different.

What advice would you give to other dentists when it comes to expressing themselves?
Don’t feel like dentistry is your whole life. It’s nice to fix smiles, but it’s also important to make yourself smile too.

Thank you for the interview.

BLOOMINGTON, Minn., USA/DETE, Zimbabwe: In record time, Dr. Walter James Palmer has become infamous all over the world. The dentist from Minnesota, who is ...

News Tue. 28 February 2017
Interview: “Implant failure is a failure for both the dentist and the patient”

Originally from Syria, Dr Iyad Estoiny obtained his master’s degree in fixed and removable prosthodontics in France before moving to Dubai in 1997. An...

News Thu. 24 June 2021
Four changes to infection prevention and control that made a difference

At this time last year, we were all collectively reeling from the onset of the COVID-19 pandemic and dealing with the confusion, uncertainty, and anxiety of...

Interview: “Our plan is to make this congress a memorable event, both scientifically and socially”

Dental Tribune had a chance to speak to the organisers of the 18th ISLD Congress in Cairo and find out more about its mission and ...

Over 35 years ago, a new invention revolutionized dentistry for years to come: CEREC. The inventor of this method for ceramic restorations, Prof. em. Dr....

Most of us know that proper brushing with toothpaste containing fluoride is the first step in maintaining healthy teeth and gums. Despite this, ...

News Thu. 28 March 2019
Interview: “When you do innovation, you also have to take care of education.”

Mectron S.P.A, based in Italy, has revolutionised the dental surgery world with the development of piezoelectric bone surgery equipment. At the IDS show in ...

News Thu. 28 May 2020
All-ceramic rehabilitation with CAD/CAM restorations made of a zirconia–reinforced lithium silicate

Patient: 55-year-old patient with an insufficiently restored dentition and a reduced vertical Dimension of occlusion.

News Wed. 9 December 2020
WHO and dentistry: moving on from misinformation

GENEVA, Switzerland: The World Health Organization’s (WHO) handling of the global pandemic has brought it more criticism than praise, and dentists are ...