In the past, we used to prepare teeth and sacrifice tooth substance to protect our prosthetic work due to the required minimum wall thickness. Today we protect the teeth with additive, adhesive restorations!

In our daily practice, we repeatedly perform restorations based on orthodontic or anatomical indications.

There are different aplasias of permanent teeth, which is one of the most common craniofacial malformations with a prevalence of approximately 1-11%. Here we encounter agenesis with and without gaps or in the form of altered teeth - such as the so-called conical teeth in region 12 or 22. Often we also find persistent deciduous teeth with agenesis of the permanent dentition.

Apart from mandibular second premolar agenesis, the lateral incisors are the most frequent places where aplasia occurs - apart from the wisdom teeth. In terms of the development process, this results from the lip-jaw-palate cleft and is the smallest form of this characteristic, which can also occur without the formation of a cleft. However, as this is in the visible and aesthetic region, the patient's desire for correction is considerable.

In the following cases, different options for restoration using direct composite restoration techniques will be presented. Of course, ceramic restorations are also possible, but considering the young age of the patients, a minimally invasive therapy is advisable. The teeth can still elongate during a secondary eruption, which can lead to the preparation margins becoming visible.

Orthodontists choose different therapeutic approaches. In some cases, gaps are closed, but the trend tends towards keeping them open. This can have consequences for the entire dental arch and also for aesthetic rehabilitation.

There are different parameters to consider as to whether the gap should be closed or kept open. On the one hand, a micrognathic maxilla is more likely to speak against a gap closure, as the distal movement of the anterior teeth and mesial movement of the posterior teeth can result in an inverted anterior overjet. A compensatory extraction of the lower premolars could be indicated. However, in the case of a distal bite, compensation by closing the gap can approximate the dental arches.

The profile of the patient should also be taken into consideration. The upper lip tends to revert back when closing gaps, which is more disadvantageous with a concave profile type than with a convex profile type.

The colour and shape of the canines are only of limited importance, as both can be changed minimally invasively. Visually more challenging is the gingival profile, which can be positively influenced by orthodontic intrusion or extrusion.

Nonetheless, the changed position of the canine teeth often results in a less favourable dental arch or leads to gaps between the canines and the premolars. The transition in the buccal corridor is altered and narrows the visual appearance. This should also correspond to the width of the nose and the shape of the face.

The following cases show that significantly improved results can be achieved by additive restoration with composite, even under unfavourable conditions. In most cases this is also possible without preparation of the tooth structure.

Case presentations
The timing of the intervention may vary. In the case of reduced conical teeth, it may sometimes prove difficult for the orthodontist to position a bracket at all. It is therefore necessary to build up the teeth prior to orthodontic treatment to be able to move the teeth correctly and thus to set the correct axial direction and position in the arch.

This can be achieved quite easily with BRILLIANT COMPONEER or a direct composite build-up with BRILLIANT EverGlow. In this case (Figs. 1 – 6; page 2) there were two differently developed, reduced lateral incisors, which were additively restored prior to orthodontic treatment and subsequently provided with brackets.

After building up the incisors, orthodontic treatment could be performed and completed. Due to their impeccable optical appearance, the COMPONEER veneers can remain in the mouth after removing the brackets.

In a second case a 14-year-old female patient presented following recommendation after orthodontic treatment had already been completed (Fig. 7).

The initial situation was a unilateral aplasia of the left lateral incisor, a mesially erupted canine, so that the deciduous canine could be preserved in its position. The gaps were closed, however the patient regarded the interincisal larger retractions and triangular formations in particular as displeasing. The different shade of the more saturated canine was less relevant for her.

We opted for an additive structure of the teeth. Unfortunately, the width of the canine was greater than that of the contralateral lateral incisor, so that small lateral deviations could not be avoided as non-invasive surgery was specified (Fig. 8). 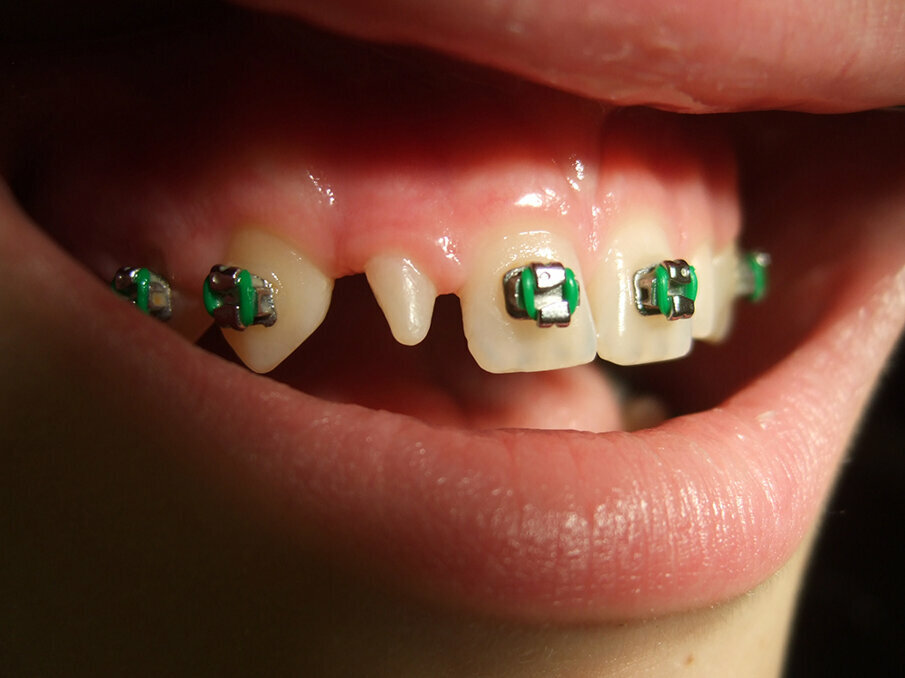 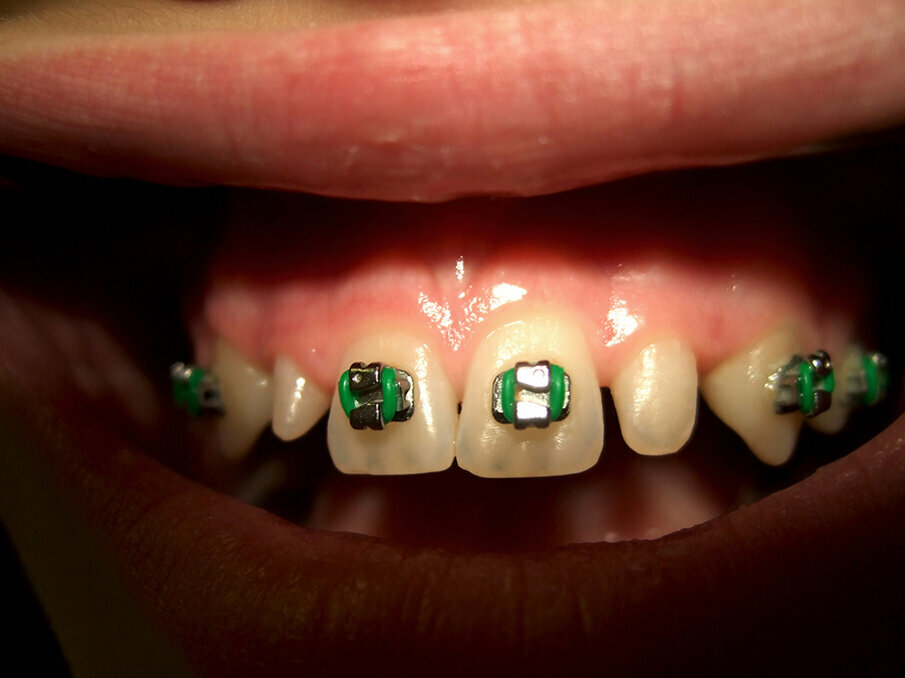 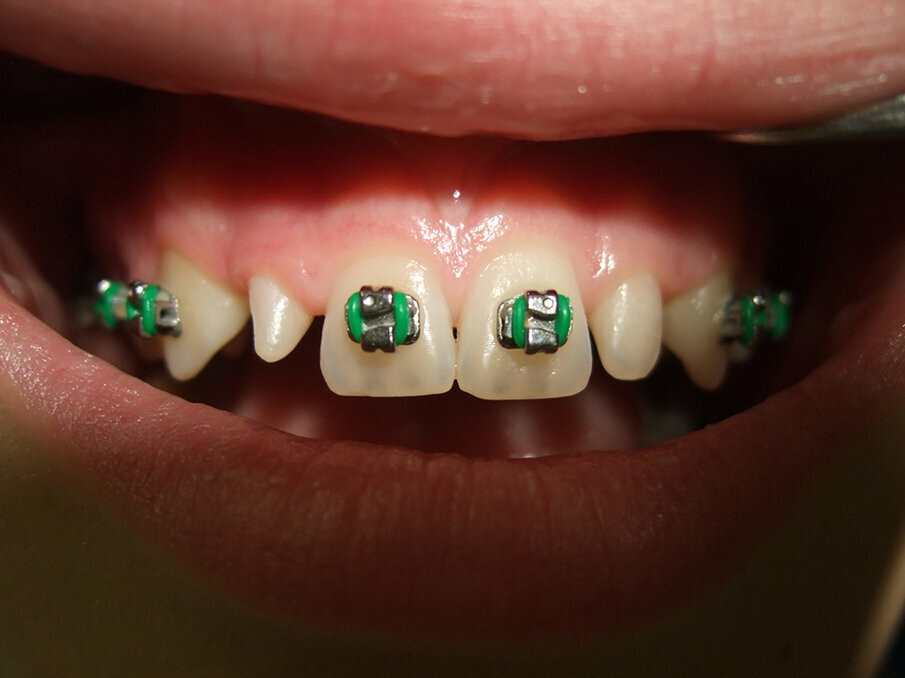 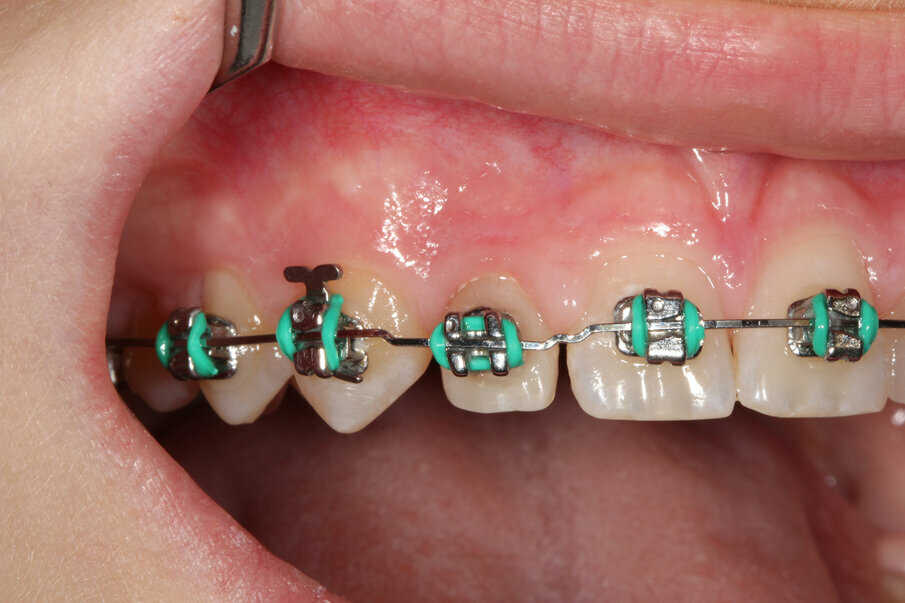 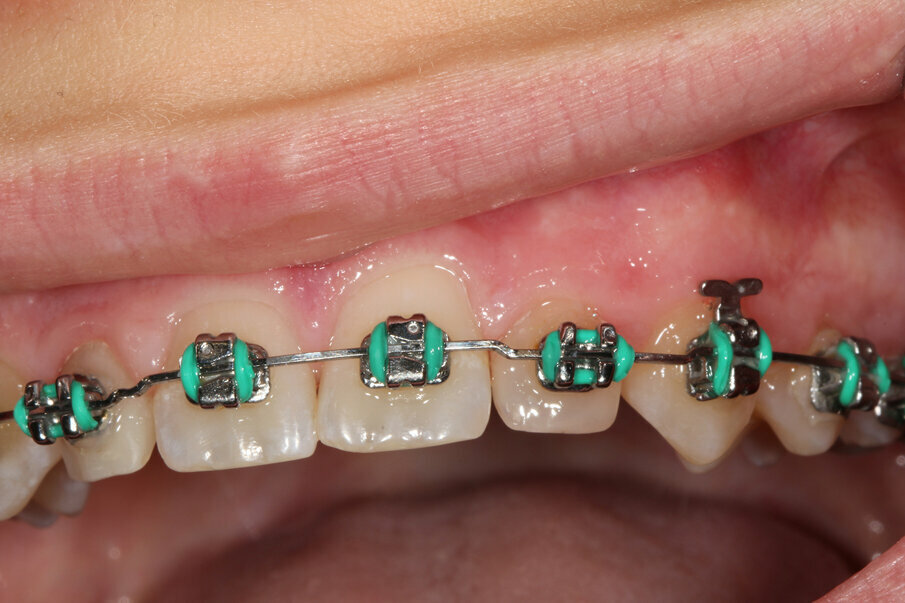 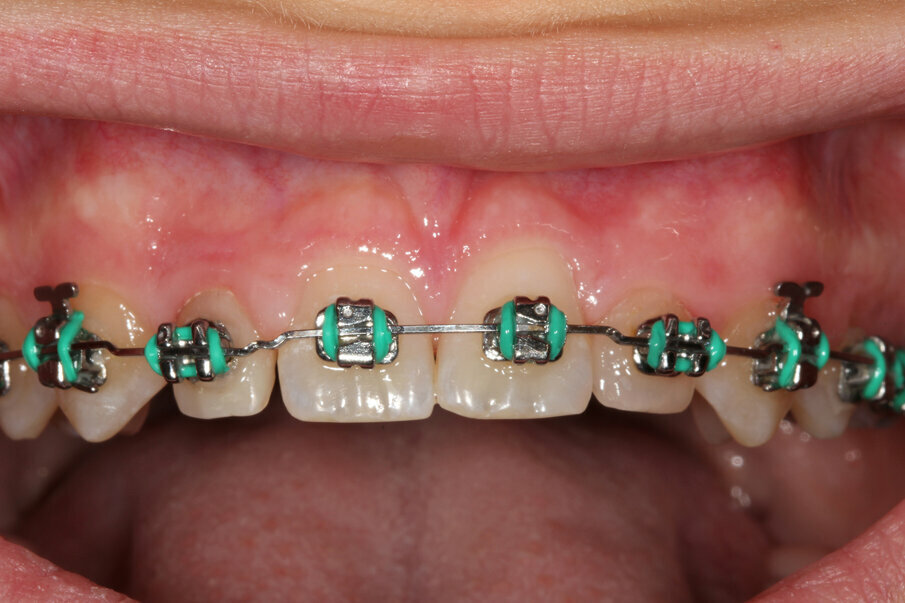 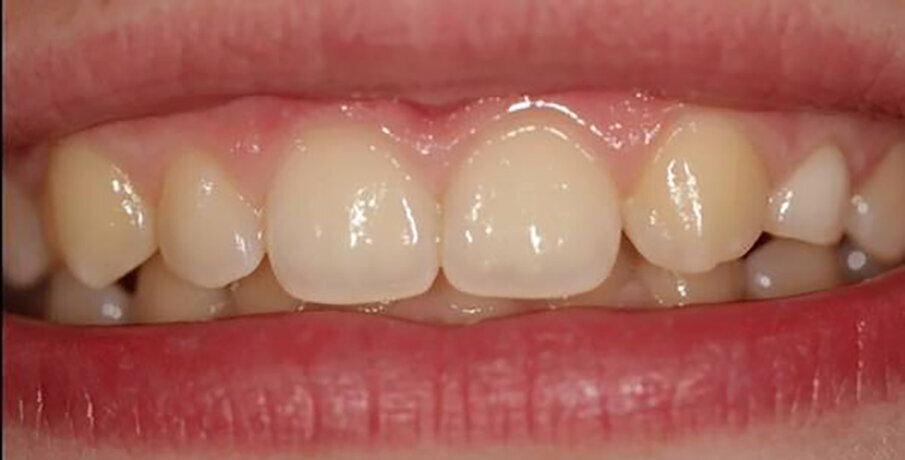 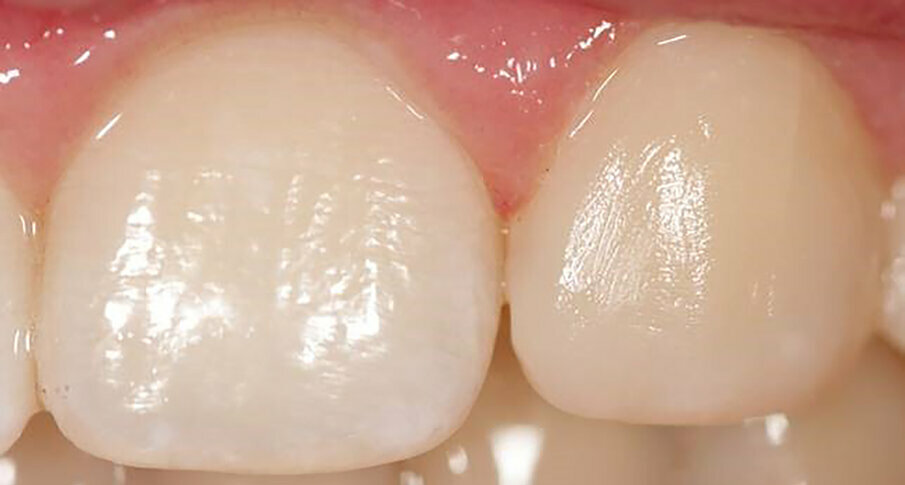 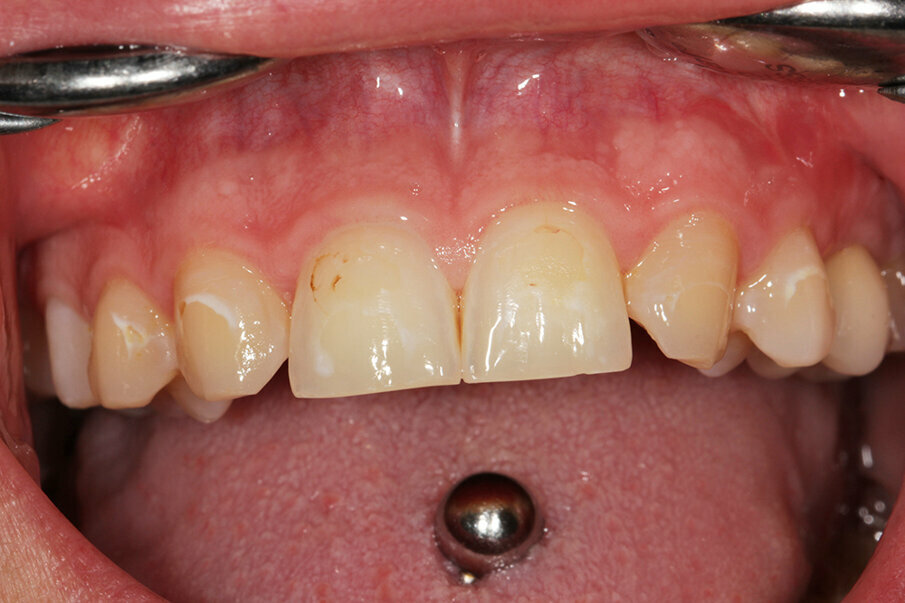 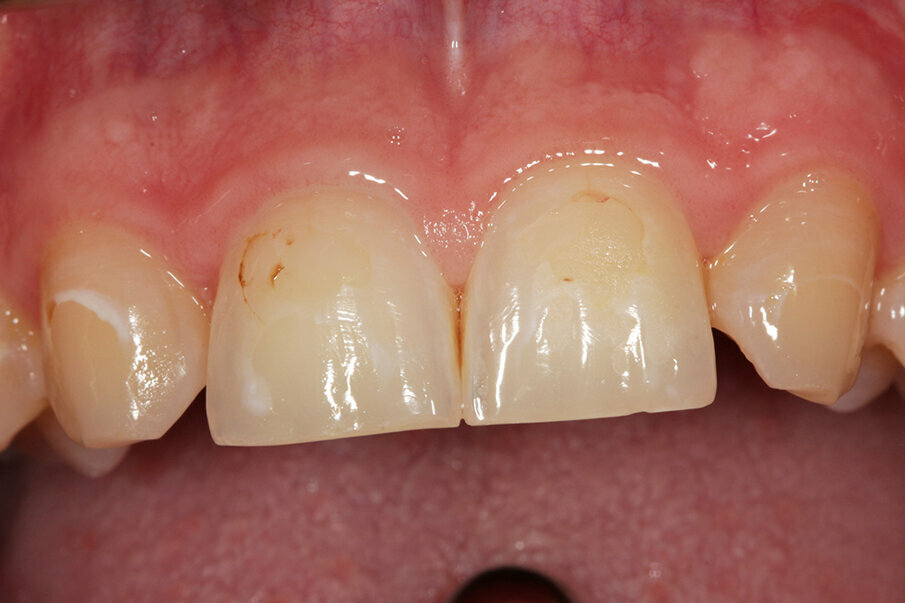 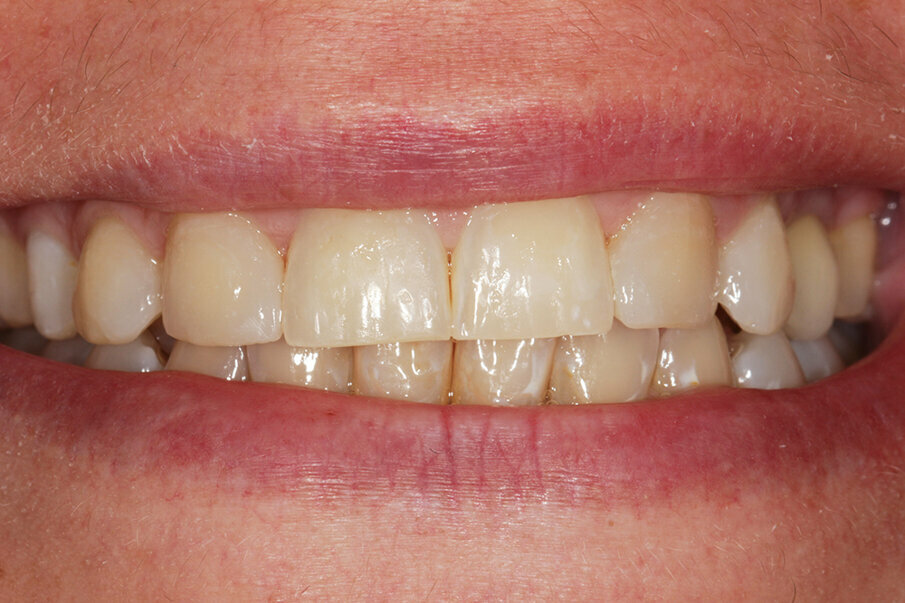 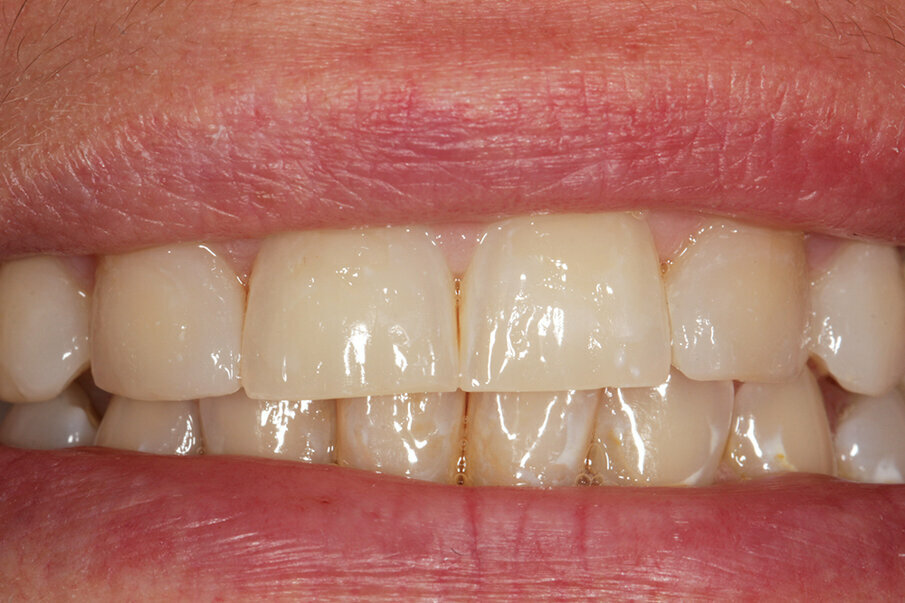 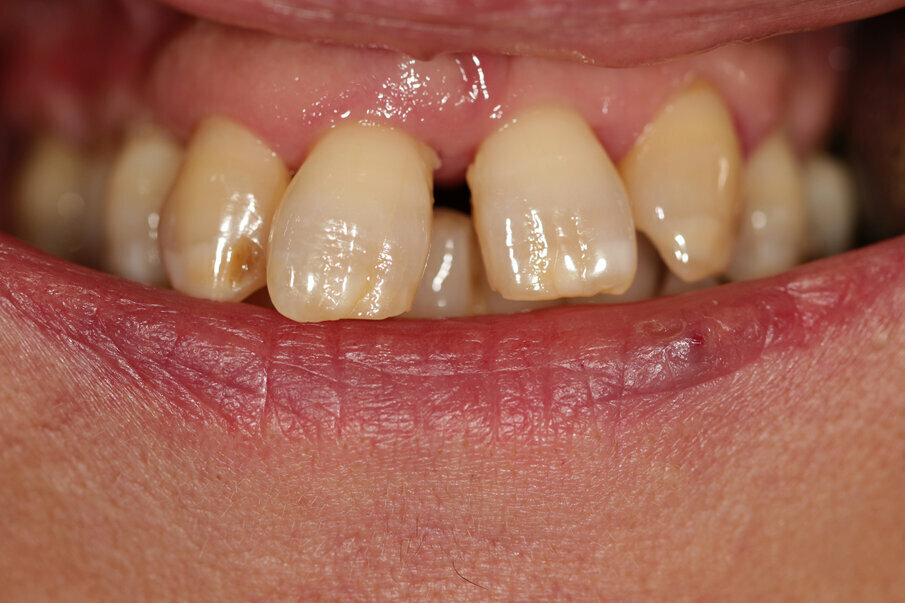 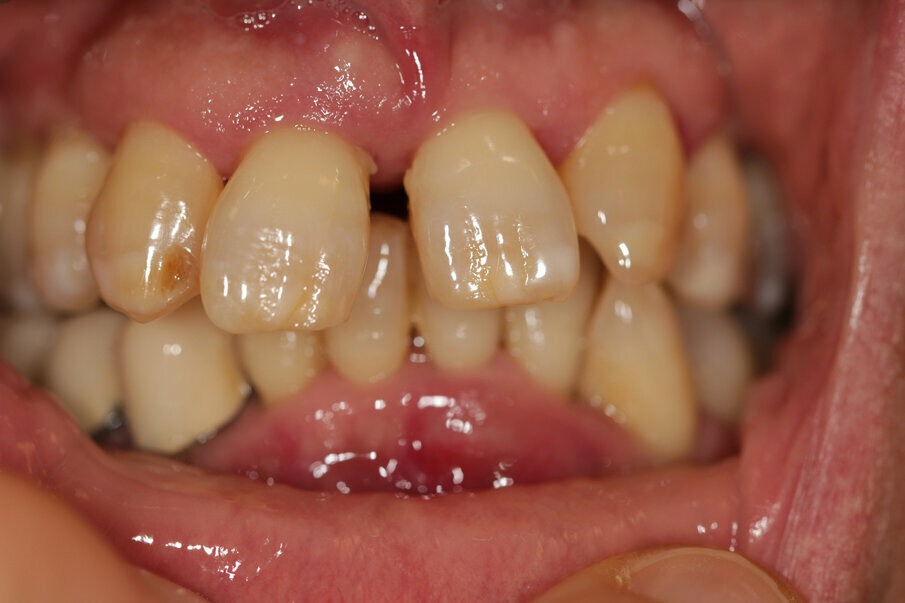 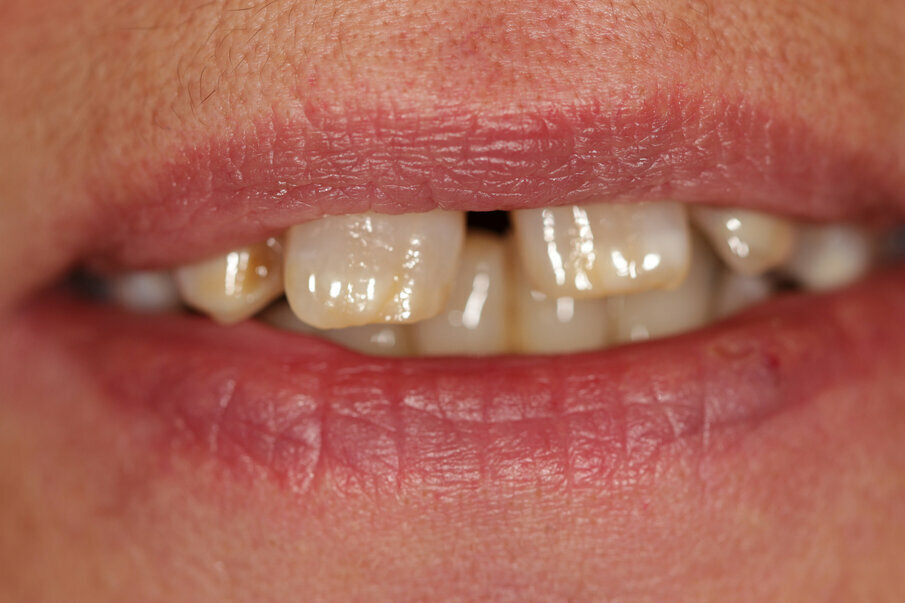 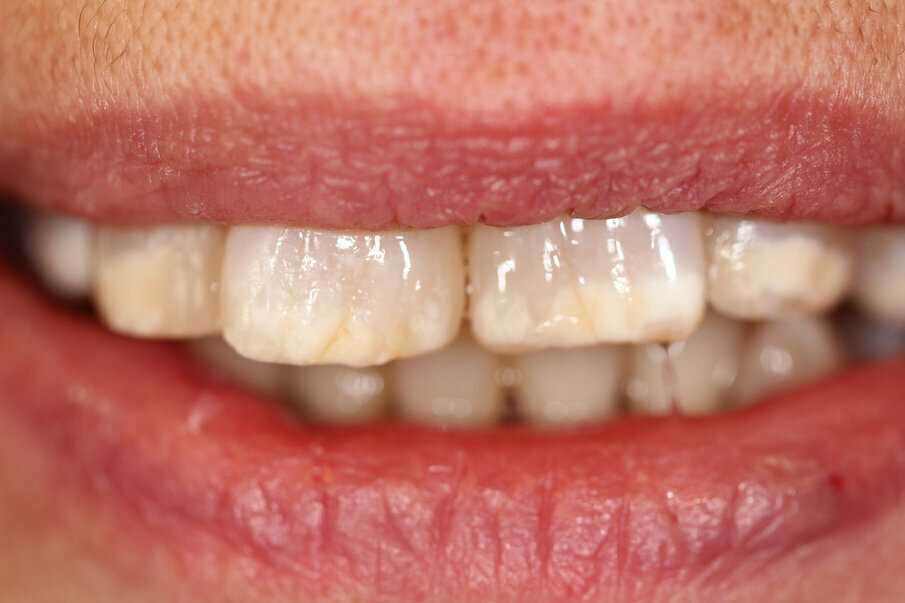 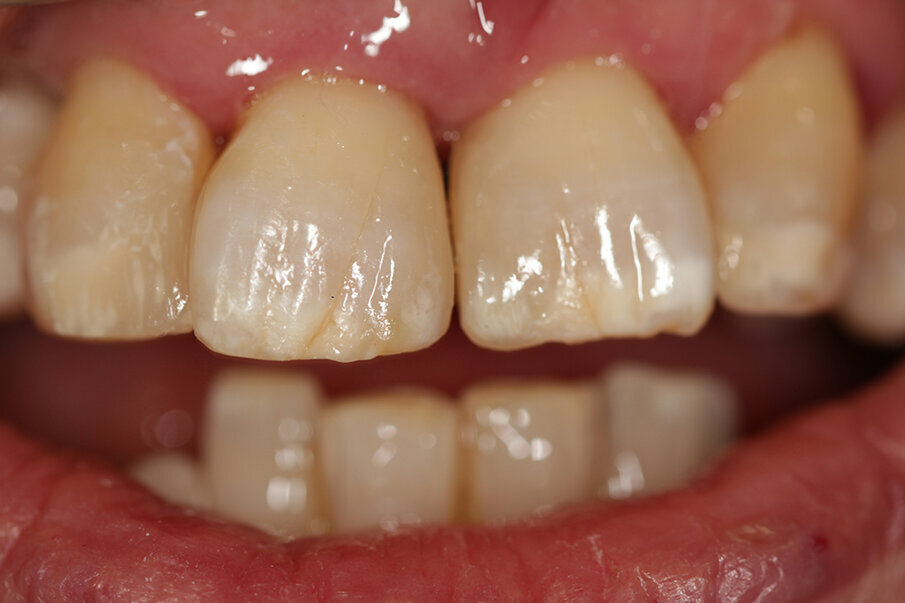 On tooth 12, the incisal edge was lengthened slightly and the edge was straightened. A stronger mesial light-reflecting ridge was applied with enamel masses to create a larger appearance.

Tooth 23 was also lengthened to an edge incisally, the lateral facets were filled in and the marginal ridges were shaped. To avoid a greyish appearance due to too much enamel, it was necessary to add Universal shade A1/B1 to the BRILLIANT EverGlow Translucent enamel masses.

The deciduous canine was lengthened significantly and built up vestibularly to ensure a transition into the buccal corridor. Minor gingivectomy was necessary cervically to create an aesthetic garland profile.

We are aware of the paradigm that form is decisive for aesthetics - as opposed to colour. Once the macroscopic shape has been realised, close attention must be paid to the micromorphology, particularly in young patients.

And this is where the special properties of the composite material become relevant. BRILLIANT EverGlow is an extremely supple and easy to shape composite, which can be processed well and delicately with very thin Heidemann spatulas, brushes and pads, yet still remains dimensionally stable.

Once we have implemented the micromorphology (Fig. 9), a little polishing is sufficient to achieve a captivating and durable gloss.

This is very important as all the light reflection characteristics otherwise often disappear again due to too much polishing and the tooth appears rather lifeless (Fig. 10).

In a further case the canines were pulled to the second position, however these canines were rather delicate and symmetrically placed. The white decalcification present around the brackets on the vestibular surface created an additional problem (Figs. 11 - 12).

Here we had to deviate slightly from the non-invasive concept and work from micro-abrasively to minimally invasive. Therapy planning was as follows: The middle incisors were prepared micro-abrasively and restored only with BRILLIANT EverGlow Bleach Translucent. The canines were transformed completely vestibularly with BRILLIANT EverGlow A1/B1 and Bleach Translucent as the patient wished for a whitening effect. The interincisal retraction of the premolars was also minimised in terms of optical appearance. The mesial marginal ridge was highlighted for light reflection purposes and was converted to more transparent enamel ridges in terms of colour - resembling the natural tooth (Figs. 13 - 14).

In cases where the gap is to be kept open early, composite teeth can be included in the gap using brackets at the beginning and then followed by inserting a single-wing Maryland composite bonded bridge. This can also be regarded as a longterm provisional restoration to keep the gap free for a future implant. The implant should not be placed too early as it remains in it position but the jaw continues to grow. This gives it a much too caudal position and the alveolar ridge develops a concavity, which is difficult to remedy with renewed bone augmentation.

Milled, single-wing composite Maryland bridges have the same flexural strength due to a tooth-like modulus of elasticity, which supports prolonged durability. One can still colour the bridge individually with stains or have it milled in cutback design and veneered with individual layers.

Late intervention
Even at an advanced age, we can realise aesthetics in a minimally invasive manner, even if it has not been practised in this case by colleagues before. Thus, this female patient presented in my practice with the notion that no improvement could be achieved without extracting teeth, crowns or implants (Fig. 15).

If one wants to close the diasthema, one has to consider the biological width so that the papilla has the opportunity to grow up to the contact point.

In this case, an elongated contact surface needs to be established in order to reach relatively far to cervical. In addition, the gap must be closed in the form of small wings. These have to be fitted exactly to the gingiva to make it look as if the tooth also has a wider root. If one leaves a slightly larger bar in the rubber dam between the two middle incisors, one can model directly on the rubber dam.

Due to the pronounced micromorphology of these teeth, it is important to extend these into the diasthema. The whitish coloured band must also be continued, otherwise the widening of the teeth looks artificial.

Using the Miris2 effect shades White and White Opaque - also by COLTENE - it was possible to imitate the whitish structure. The effect shades are placed under the enamel layer and applied very finely with brushes.

Of course, such cases can also be solved with crowns, partial crowns or veneers, but the more minimally invasive we proceed, the more likely we are to protect the patient's tooth and, for the benefit of the stability of our restoration, not remove any hard tooth substance.

Conclusion
Using the BRILLIANT EverGlow composite, its very natural shades and the natural layering technique of opaque, universal and translucent shades, we can achieve invisible adhesive direct restorations. Due to their excellent polishability and good material properties, they are very durable on the one hand, and on the other hand, the patient can no longer distinguish between a restoration or his/her own tooth.

Whereas production times with zirconium of up to 14 hours are no exception, aesthetically appealing composite crowns can today be created within 35 minutes ...

News Sun. 9 August 2020
The next generation of the composite veneering system

After almost ten years, the leading composite veneering system shines with a new brilliance: the customisable BRILLIANT COMPONEER composite shells have been...

Worldwide, dental practitioners are convinced of this innovative, efficient latest generation bulk composite. Overwhelming feedback since its launch only ...

News Mon. 18 June 2018
When an idea turns into innovation

Although the headquarters of COLTENE are in Switzerland, its endodontics plant is in southern Germany. At the factory, located in Langenau, a town between ...

Modular nickel-titanium systems enable the endo-expert to work flexibly in a variety of indications. Meanwhile, most patient cases can be prepared ...

COLTENE in the Middle East

COLTENE is a global leader in the development, manufacture and sale of consumables and small equipment for dental treatment. Dental Tribune Middle East and ...

share
save
advertisement
Cosmetic Dentistry Tue. 7 September 2021
The material of the future for all kinds of indications

Implant prosthetics and dental prosthetics differ considerably, with the absence of periodontal ligament in the implant/prosthesis complex. This situation ...